Arab archives are mostly lacking in valid documentation. Both Arab governments and peoples did not keep their documents, especially if the documents were decades or centuries old, only very few documents would survive. This is unlike the case of Turkish Ottomans, the European countries and the nations that have preserved their civilizations for thousands of years, such as the Chinese and the Japanese. Much of their history is preserved. They also give researchers access to their documents and exert great effort to research, and write and enrich the national and private historical centers in those countries. 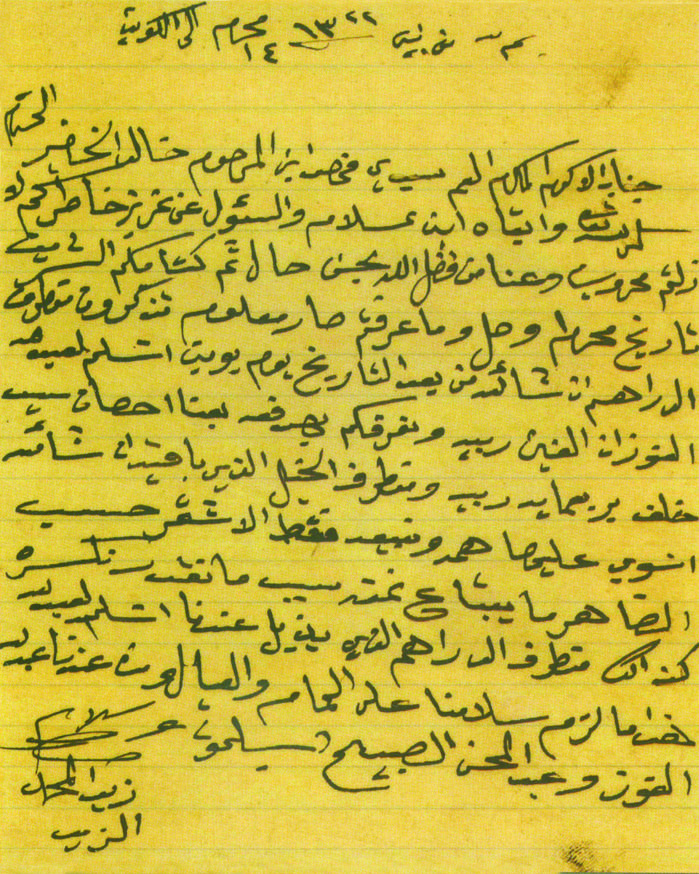 If we find some political documents and Arabic correspondence, there are very few of them in our historical centers about the old export – import trade through the ports of the vast Arab world. While we can also get some of them in Egypt and Morocco, we find nothing in our Arabian Gulf except what the Turkish and British archives kept for us and what our Gulf countries were able to keep and save from damage.

Having mentioned the scarcity in these Gulf commercial documents, we would stress the fact that the documents of the history of Arabian horses are the scarcest and rarest. Our region witnessed the sale of the best Arabian horses by the Arab horse owners to world merchants. However, due to the lack of document archiving culture, most of these documents were lost and unfortunately only few of them could be found.

One of the few books that contained a few documents of Arabian horses in Kuwait is the book of Dr. Abdullah Al-Yousef Al-Ghunaim, “Documents from the History of Purebred Arabian Horses in Kuwait“, published by the Center for Research and Studies on Kuwait in 2016. It is an important and unique book in its subject. The author collected in his book everything he had found about the documents on Arabian horses in Kuwait. He benefited from 12 Arabic references and 6 foreign references, the most important of which was the manuscript “The Origins of Arabian Horses” of the ruler of Egypt between (1854-1848), Abbas Helmi the First. The book was authored by a team of horse experts who were selected by Abbas Helmi from his own entourage, including the manager of his stable Mustafa Mustafa Bey, Prince Mohammed Ali, Rustum Bey and others. The mission of this team was facilitated by Prince Faisal bin Turki, may Allah have mercy on him. They roamed among the tribes and met their sheikhs and experts in the history and genealogy of Arabian horses.

From this manuscript, Dr. Al-Ghunaim selected the information about the horses that arrived in Kuwait because it was the subject of his study. It was about the Kuwaiti dignitary, Yusuf Al-Bader, who was called in the manuscript “the Sponsor of Kuwait” because he was known for acquiring the most important Arabian breeds. The following is an excerpt from this manuscript:

The fourth chapter deals with horse breeds called “Al Hudb”, which were given this name in view of the length of forelocks. Sultan bin Rubaian, the Sheikh of Otaiba, was asked – in the presence of a number of elders from the tribe of Otaiba – about the forelocked mare of al-Dhahiri. He replied that in the reign of Abdul Aziz bin Saud, the latter asked Mana’ bin Suwayt of Al-Hujailan tribe for a forelocked mare from among his horses. Mana’ gave him a yellow forelocked mare, which – along with its offspring – moved into several stalls. One of its offspring was a red horse which was sold in Kuwait to horse traders from India.

Dr. Al-Ghunaim obtained from the British archives important documents on the Arabian horse trade in Kuwait. The oldest of these documents was the one in which the traveler James Buckingham (1786-1855) stated that the total number of Arabian horses exported from Kuwait and Basra to the ports of Pompeii, Madras and Calcutta in 1816 was 1500 horses. The price of each horse was 300 rupees, and transport cost was 100 rupees, while the expenses of its feed and care to the end of the trip were 100 rupees.

Buckingham said that the Ottoman authorities banned the sale of Arabian horses. Therefore, bribes were paid to the governors of Basra to turn a blind eye to the shipment of horses in British ships.

Among the most important documents relied upon by the researcher is a collection of documents of Al-Khalid family located in the Center for Research and Studies on Kuwait, including this document, which dates back to the beginning of the last century. It states that:

“The mare was originally belongs to Iqal Al Khalidi, it was taken by Mahmoud Sami Tabor Aghassi, who lived in Al Ahsa. It had a paper certificate testifying that it was from Obayat Alqasar, which appears to be a stall owned by Hubaish son of Mikrad, friend of Tabor Aghassi. Mohammed Sami delivered the mare to Basra and sold it to the aghas of the Holy Mosque of Makkah.” Then the document goes on to say, “And the mare was taken by Hamad Al Khalid, one of the notable aghas, who brought it to Kuwait”. This document shows the great interest in horse genealogies since ancient times and the significant intertwinement of their authentic genealogies in Al Ahsa, Makkah, Basra and Kuwait. Rare Old Photos from The Kingdom of Saudi Arabia