Islamic heritage is full of treasures of forgotten journeys and peer-reviewed literature about journeys. Part of this heritage is related to the description of an entrenched religious obligation in the Islamic conscience, namely, Hajj, to which the Westerners and Muslims, alike, have devoted plenty of room in their writings, whether to describe the road, the urbanization of the Hijaz, or going deeply into the sacred monument in order to convey a close image of these rituals. 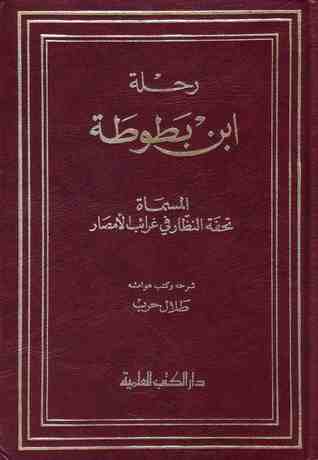 Tuhfat Al-Nuzzar
Among the famous books is Tuhfat al-nuzzar fi gharaib al-amsar wa-ajaib al-asfar (A Gift to Those Who Contemplate the Wonders of Cities and the Marvels of Travelling) by Ibn Battuta (died in 1377 AD). Ibn Battuta began his trip to Hijaz from Damascus describing the road and their journeys through Bosra to Tabuk, and then to Tayba, the city of the Messenger of Allah may peace be upon him, providing information on the stations of the trip and the habits of the pilgrims of the Levant.
He also described Tayba and its Holy Mosque, giving accurate details of the Prophet’s Mosque, about which he said it was rectangular “and surrounded, in four sides, by flagstones. In the middle, sand is spread over the Sahn (courtyard). The Holy Mosque is also surrounded by a paved street with carved stones. Located in the southeast of the Holy Mosque, Holy Raudah, all Prayers and Blessings of Allah be upon its inhabitant, has a magnificent design, hard to describe, and is illuminated by fine and stunning marble sculpture”.
Ibn Battuta described Holy Mecca saying: “a big town of adjacent buildings inside a valley surrounded by mountains, where visitors can only see the town when they reach it”.
He also said about the Sacred Mosque “it is in the town centre and has a wide courtyard. It extend more over 400 cubits from east to west, where the Holy  Kaaba lies in the middle of it”.
In addition, Ibn Battuta mentioned the Black Stone, the Holy Shrine, Tawaaf, Zamzam, the doors of the mosque and the area around the Gravestone. He also mentioned the scholars and people and their virtues. Moreover, he narrated a number of stories in different contexts that give details about the Hajj and its customs saying: “On the first day of the month of Dhu al-Hijjah, drums and tabors are hit in times of prayer at day and night, announcing the blessed season. Hitting the drums continues everyday till the day of heading to Mount Arafat..”.

Ibn Battuta mentioned the covering of the  Kaaba that was sent on the Day of Sacrifice from Egypt to the Sacred House, and the way it was let down on the Holy  Kaaba. 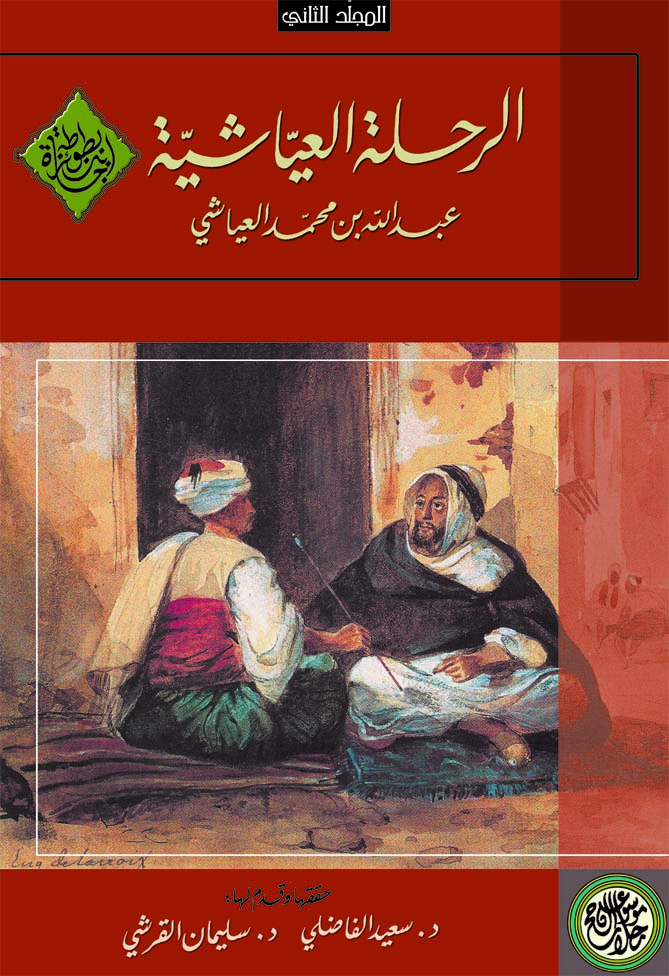 Al-Ayyashi Journey
Among the heritage treasures is the journey of Abu Salim ibn Abi Bakr al-Ayyashi (11th century AH / 17th century AD), known in the scientific fields as Taedad al manazel al Hijaziah (the listing of Hijaz houses), Al tareef wal ijaz bi baad ma tad’o elihe fi tareeq al Hijaz (Defining and summarizing of what is necessary in the way of Hijaz) and Rihlat al-Ayyashi al sughra (The minor journey of al-Ayyashi).
Originally, it is a letter sent by the author to one of his companions, scholars of Fez who were taught and endorsed by Ayyashi. It portrays the convoy of the Sijilmassa pilgrims within the pilgrimage journeys of Morocco.
Scholar and the traveller Abu Salem al-Ayyashi summed up in his Minor Journey (1068 AH / 1657 AD) the stages and houses on the way to Hijaz. This letter was dated on 28 Rabi I, 1068 AH corresponding to January 3, 1658 AD.

In this letter, Ayyashi provides his companion with tips of interest to travellers setting out on their journey to Hajj, including the scientific names of urban areas and names of scholars on way from Sijilmassa to Hijaz, in addition to the supplies they need and the feed for animals. He also mentioned the markets on the road and the different goods from one place to another. Moreover, he reminds travellers to be cautious about travel times from one place to another to reach Hajj on time.

The Egyptian Caravan (Mahmal)
Among the famous writings on Hijaz trips are the works of Muhammad Sadiq Pasha (1822-1902), which comprise his account of pilgrimage trips, when he used to travel with the Egyptian Caravan.
These works depicted the journey to Hijaz and they were published under the following titles: Nubza fi istekshaf tareek al ard alhijaziah mina al wajh wa yanbu albahr ela almdeena alnabaowyah (A Brief of exploring the way of Hijaz land from Al Wajh and Yanbu to Madinah) printed in Cairo in 1294 AH (1877 AD), Masha’al al Mahmal (Caravan Torch) printed in Cairo in 1298 AH (1881 AD), Daleel al Hajj lil wared ela Mecca wal madeena min kulli fajj (Hajj guide for arrivals to Mecca and Medina from far and wide) printed in Cairo in 1896 AD by Bulaq Press.
Mohammed Sadiq has visited the Hijaz lands several times, initiating his first visit to Medina in 1277 AH (1860 AD) together with governor Said Pasha. His second visit to Medina was in 1861, which was recorded in his book A Brief of exploring the way of Hijaz land. Seeking to perform Hajj, Sadiq made his third and forth visit in 1880 and 1884, recording their events in his books Masha’al al Mahmal (Caravan Torch) and Kowkab al hajj (Hajj Planet). His last trip was on an official mission with the intention of handing over wheat – alms collected form Mecca and Medina – in Jeddah in 1885, that was mentioned in the footnote of Kowkab al hajj.
It is believed that Mohammed Sadiq, who had a camera in his position, was the first to take a photograph of the Prophet’s Mosque in 1861. He also took a photograph of the Meccan Sanctuary and other sites related to Hajj in 1880, as was pointed out by some researchers including William Facey.

There are also many other books that depict Hajj and Hijaz, such as the journey of the Ibn Masum Al Madani, or Salwatu al ghareb wa uswatu al areeb, and the journey of Ahmad bin Autaiwer al Jannah (died in 1849), called Rihlat al munah wal menna (the journey of destiny and grace).

Travellers’ Impressions
Western trips include famous ones, such as the journey of Carsten Niebuhr, in which he described the provinces of the Arabian Peninsula and the journey of the French writer and poet Charles Didier in 1854, which was collected in his book Sojourn with the Grand Sharif of Makkah. Didier began his journey from Egypt, met Grand Sharif of Mecca Abdul Muttalib bin Ghalib in Taif, and described the route of Jeddah and the Red Sea, and the people he met. Didier’s book also contains some personal impressions of the public places and people, and some accurate daily observations that were written about the conditions of Hijaz in the early second half of the nineteenth century. Reading Didier allows you to find a great behavioural analysis of all these characters. In more than one place, Didier repeats that his trip came by chance and has no political justification. 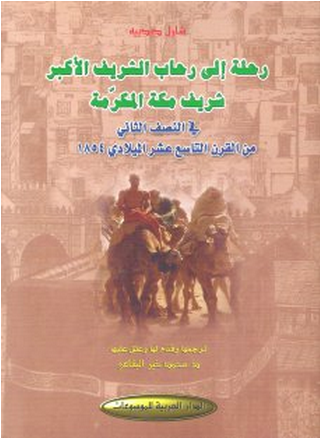 Writings and Summaries
Among the travellers who visited Hijaz was Charles Doughty, an English traveller who joined a pilgrimage convoy under the pseudonym “Khalil” and arrived in Mada’in Saleh in 1876. He was able to walk around the region, copying inscriptions and engraved drawings. On July 5, 1878, Doughty travelled with a convoy of pilgrims to Hijaz. He arrived in Taif, then went to Jeddah in August 1878 and wrote Travels in Arabia Deserta, in which he drew a unique picture of the region, about the Bedouins and their lives; their generosity and customs, highlighting many paradoxes in their lives.

There are also many summaries of Western journeys to Hijaz, including A la Decouverte de L’Arabie (the discovery of the Arabian Peninsula), through which French researcher Jacqueline Pirenne tried to collect the proceeds of five centuries of adventure and science to tell their interesting stories and record their services in the field of human knowledge, through these trips, which have multiple aspects of writings in their contexts, and are difficult to limit due to their multitude and diversity.